I have designed a thermocouple meter for use for obtaining temperature readings from thermocouples. Its used together with the thermal chamber described elsewhere on this site. 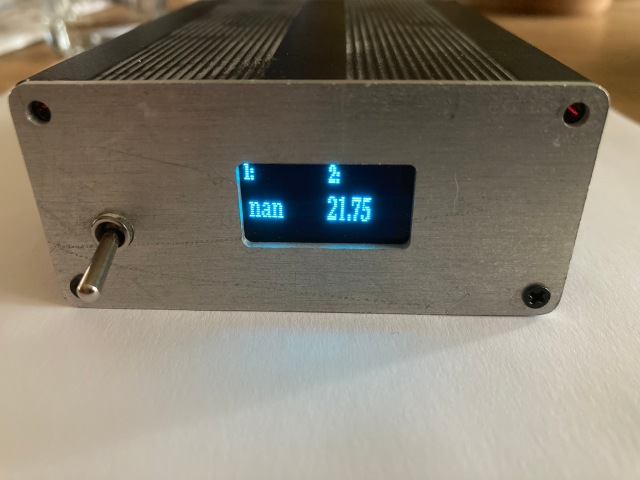 The design is done primarily as a programmable instrument, but it has a OLED display, so it can show the current temperature.  The programming uses SCPI, the same type of programming strings that most newer (1990 forward) instruments use.

The meter consists of a Empyrean microcontroller from Etherkit and a couple of MAX31855 thermocouple amplifiers. For the MAX31855 it is important to get them from a reputable source, not ebay or aliexpress as there is a lot of fakes around.  Display, connectors for the thermocouples and such parts are from ebay.

This design requires a Etherkit Empyrean or other SAMD21 series microcontroller. It will not work with other arduino boards.

The enclosure used is a cheap e-bay case 100x75x35mm. For this I have selected to mill out new font and back panels.

There are 2 PCBs that interlock on this design, a main PCB that fits the enclosure and holds most of the parts and a display PCB for fixing the display in the correct position. 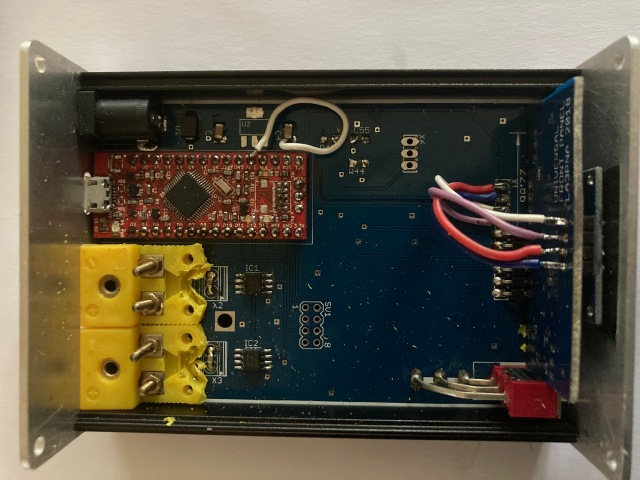 The greenwires are fixed in the last version of the board.

There is a planned extention header (8 pole connector) for a 2. board of thermocouple amplifiers. This way the meter can measure up to 4 points in the same meter.

A couple future points that should be inproved up on is the voltage regulator. This should be replaced with a small switch mode regulator to 5V and a linear regulator down to  3.3V. This have been used in several of my other design and I consider that a building block now. Correctly build it radiates no detectable noise.

Another point of improvement is that USB is finky at best. It would be better to replace this with a network connection. Experience is that USB times out after a while and that interrupts measurement over longer periods. Adding a network card should be easy and there is plenty of space in the microcontroller.

Feel free to try it, change the code and play around with it. A limited amount of PCB’s and panels may be available from me.

github for this project

Electronics engineer with interests in RF and analog electronics.
View all posts by Thomas S. Knutsen →
This entry was posted in Instruments, Temperature and tagged Etherkit, SCPI. Bookmark the permalink.

1 Response to Thermocouple meter and datalogger